The Relationship of Writers and Critics - A Response to Sarah Phelps, Niall Johnson and The ABC Murders

Another year, another Christie adaptation that does well but causes a ruckus among devotees of Mystery's First Lady. TV veteran and self-described 'Pervert' Sarah Phelps turned her skills to adapting one of Poirot's adventures, but as with Ordeal of Innocence, rejigged it to surprise audiences. Poirot is now old and faded, a shadow of his former self, and his battle with the elusive 'A.B.C' takes on a seemingly more personal dimension.

Now ostensibly, fans being upset about changes to source material is par for the course and wouldn't be worth talking about, save for in this instance, an additional debate arose. Phelps, as her moniker implies, is very upfront about her views, and as such, tends to joke or shrug off Twitter critique. One such example was from poet Niall Johnson, who wrote a detailed review of his dislike of the adaptation. Phelps blew it off and this then engendered discussion about viewers having the right, or need, to speak directly with creators. 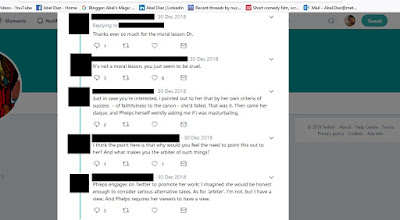 Sure enough, this snowballed into other screenwriters offering their two pence on taking critique from Joe public. 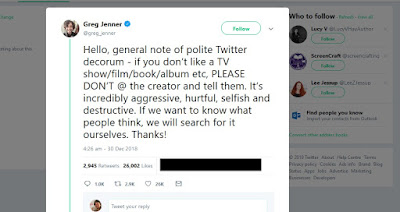 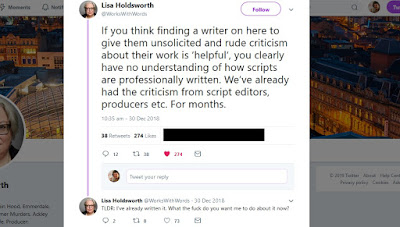 DISCLOSURE: I do not know either of the two main individuals or have read the original 'The ABC Murders'. While Phelps could've, perhaps, taken the criticism better, she is also a veteran screenwriter with a particular sense of humour and it's not my place to lecture her. As for Johnson, while the review is passionate, it's also a little dodgy in structure and overfocuses on fealty to source material and not enough on the merits or negatives of the series itself as a standalone work.

This is an interesting topic for me, having walked on both sides: longtime followers know I used to do film and TV criticism, starting in an amateur capacity on Youtube before transitioning to, however briefly, paid work for websites. There is a tendency, however innaccurate, to assume that critics are some manner of vanguard, a sort of 'quality police', there to tell Hollywood or the industry wherever what's right and wrong. Add in the democratization of opinion, where anyone with an internet connection and a platform can share their views i.e. be a critic, surely it must be a free for all?

Of course, a cursory glance at box office or ratings guide like the BARB show that negatively reviewed material does not always do badly, nor does well reviewed material always do well. Nor should numbers determine what you like: we all have differing opinions/tastes and there's nothing wrong with that. However, that right to express views is not what's being taken umbrage with here. Rather, this is about if said democratization entitles one to address and critique a creator directly on a large platform, regardless of said critic's merit or background.

Partially yes, but mostly no. INSOFAR AS TAGGING CREATORS IN, I must stress.

Yes, the openness of a platform like Twitter makes criticism or differing views impossible to avoid, and so long as terms of Use are not violated, they are fine to do so. However, it's important to remember Phelps, Holdsworth, Jenner and others are not against criticism; they just don't find it tactful for people to bombard them directly with reviews. Boundaries exist and politeness doesn't matter if you're crossing a decorum line. It's the presumption that being a viewer on Twitter entitles you to have a direct audience with a creator i.e. @ your reviews.

Even if you don't intend it to be rude, it still is, since you're shoving your work directly under someone's nose when you have no real need to, since there are other ways to express opinion, and presuming you must be listened to. Yes, Twitter is a public platform, but there's a considerable difference between simply writing up your opinion, positive or negative, and sharing among peers or enthusiasts, and then shoving your critique right in the face of a creator. By doing this, you are presuming your view is more worthy of specific attention when there's no qualifiers for it: your own subjective opinion is no more inferior or superior to someone else who shared it via normal channels.

It also, unhelpfully, presumes there's no quality control in the industry (Script editors, development and producers? What's that?!), or that creators never get told no. Oooh boy, where do you even begin with that...

And that's not getting into the logistical headache of how does a creator read through reams and reams of often contradictory opinions on platforms as big as Twitter or reddit or Youtube? How does he or she decide what gets priority? By platform? By length? By quality of grammar and punctuation? By the fact that the person is a writer? If so, what kind? Is a playwright or novelist's argument as valid as a another screenwriter's? 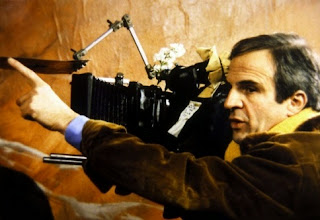 Even on the professional side, critics don't really view themselves as guides or advisors to the film or TV industry. That's not the relationship. They don't write reviews with the purpose of making an artist change their work: they write because they have a passion for the medium and want to express and discuss their reactions, emotional and intellectual, to a creator's work. They help us see their work in a grander context. Mark Kermode's certainly spoken many times about the difference between critics and practitioners. If critics had enough power to really kill a project or tell off the biz, well, BvS and Venom, among many examples.

So, does all this mean the industry is above reproach and you can't criticize things? NO. You can still write or film reviews, still going on Twitter or reddit and discuss and still be free to watch what you want to. But do it because you want to talk and debate, because you have passion, not because you want to be an armchair director and tell people FAR MORE EXPERIENCED than yourself how to do their jobs. That's not criticism or brutal honesty, that's hubris and both fandom and the industry are filled with enough wannabes as is.
Posted by ADiaz at 13:16