Well, now I'm a performed playwright! This past Sunday, May 6, my One Act dystopia play Cull premiered at a special members-only New Writing triple bill at the Oast Theatre in Tonbridge, Kent. It depicts a future where resources are at critical, overpopulation is the dominant and our government must consider a 'terminal option' for the crisis.

Directed by Sandra Barfield (funny thing about this: I had sent this off two years earlier, and they just got back to me in March. Stranger things indeed... but I'm not complaining!), it closed off an afternoon of new plays (following both a ten minute and One Act comedy about infidelity and Brexit respectively). 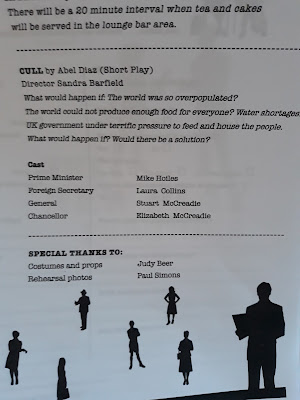 It was a fun experience: naturally, I was nervous about seeing my work performed live in front of an audience. All the expected concerns came up: is it exciting? Is it clever? Is it unsettling? Did the director get it? Did the actors get it? Was the dialogue right? Was the pacing right? Were the characters will fleshed out? Did their conflict make sense? Was it too long? Was it too short possibly? Was it practical?

However, all went off without a hitch and the response from the audience was very positive. Many were indeed unsettled by the ethical questions posed by the play, and my own observations of the audience confirmed this. 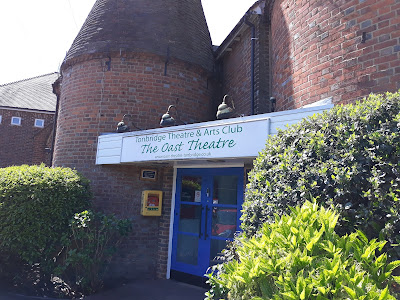 So, what next? All goes well and it recieves the winning decision in October by the Oast's board, there may be full follow-up productions on the fringe festival circuit around England. After that, well, skies the limit, no? I have also been offered to have any 10 minute plays produced by another theatre as a result, so I will keeping an eye on that. If there is a moral to this story, it's expect the unexpected.