Review: Adventures in the Screen Trade

On November 16th, screenwriting lost a real legend in the form of William Goldman. Master of both original writing and adaptation, Goldman's resume is filled with multiple titles that most writers would be lucky to have just one of in their entire careers: Butch Cassidy and The Sundance Kid, All The President's Men, Magic, The Great Waldo Pepper, Stepford Wives, A Bridge Too Far, Marathon Man, Misery, Princess Bride, Chaplin and Maverick, as well as assisting on A Few Good Men, Good Will Hunting and Twins.

Playwright, novelist, festival judge, teacher, critic, essayist and having a front-row seat in the New Hollywood of the 1970s, there's a lot to unpack with Goldman. For the aspiring screenwriter, or creator period, or even just movie geek, where do you start? And can you learn anything immediately applicable to craft? Well, part biography, part writing manual, Adventures in the Screen Trade answers with tales of his life, career and views on cinema. 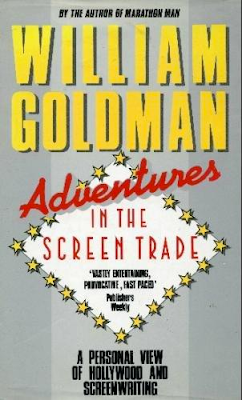 Spanning the late 60s and 70s, the book is split in three: the first is Goldman's views of the then-contemporary industry and is where 'nobody knows anything' comes from. It's more an interesting artifact than wholly applicable to today, though if you follow any Hollywood rag... it may not have have changed all that much in some ways.

The second part is about his films, spanning Charly to A Bridge Too Far, detailing the ups and downs of each project, as well as some unmade ones like his version of The Right Stuff (later adapted by Philip Kaufman) and the musical remake of Grand Hotel. Goldman's skills are in full-force in these emminently readable accounts: it manages a fine balance of being informative and insightful about the ins and outs of filmmaking and storytelling without reading as gossipy, self-congratulatory or even spiteful, despites the missteps and bad luck. Goldman's tone is rather casual but not without some moments of deprecation of his own work and early naivete, and a good sprinkling of wit.

In addition, Goldman spends a good chunk of each chapter talking about his process, discussing how each screenplay represented a different challenge for him. But more than simply memories, Screen Trade comes with a little story about adapting a short story into a screenplay in its third section, Da Vinci. The short story is pretty rudimentary: a story about a little barber's son who becomes entranced with his father's newest hire, a veritable Michelangelo of hair. If you wanted a mini-masterclass in how to adapt a work to film, as well as some good writing primers, this has got you covered.

Honestly, do you need me to say more? Just go out and add this one to your collection. And while you're at it, also check out the sequel, Which Lie Did I Tell? More Adventures in the Screen Trade. It carries through into the 80s and 90s, and not many memoirs can go from crippling depression to stories about gay lions with such grace.
Posted by ADiaz at 01:16