Writers, why do we do this? Why do people, regardless of their specific discipline, seem to engage in stupid arguments like this? Why can we not just respect that every form of writing has its own rewards and challenges, and that quality storytelling should, really, be the only thing of consequence? But nope: in a misguided attempt at perking up novelists about to cross the Hollywood threshold, New York Times bestselling author Jessica Knoll (Luckiest Girl Alive) said this: 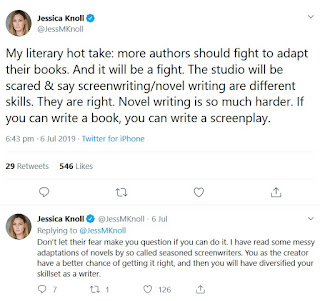 To which other writers said this: 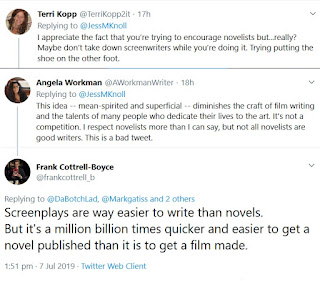 And then she tried to backpedal with this: 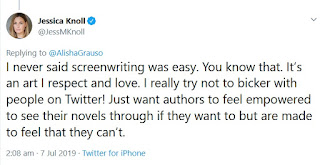 So, fine: giving her benefit of the doubt and saying she simply miscommunicated. How you can be a bestselling author and not understand how words work is beyond me, but okay, playing fair here.

Why do this in the first place? Why do an arbitrary 'this is easier' false dichotomy and pit two mediums against each other, instead of just empowering authors to broaden their horizons? You can lift up without, however accidental and unintended, putting down. Writers should always seek to experiment and challenge themselves: it's the only way we can truly ever grow and develop our tastes and voices. It's also not hard to acknowledge the long list of botched film adaptations of famous books (The Scarlet Letter, both versions of The Sound and The Fury, The Razor's Edge with Bill Murray, Seventh Son, we could just list them till the end times).

However, a film/tv show is not a novel, and a novel is not a film/tv show. Great storytelling may be universal, but the techniques are not. What works in one medium simply does not in another (ironically, Knoll validates the need for more transformative adaptation of novels to film, as the bad ones often try, and fail, to retain what does not translate): the endless description, liberal pacing, infinites diversions and subplots and more esoteric approach to narrative don't compute with the precision, succinctness and time restrictions of performative media. Even ambitious epics like Robert Altman's Nashville and The Fall of the Roman Empire pale compared to the complexity of a comparable novel. However, size is not determinative of a work's quality, is it?

Gatekeeping and this idiotic art-school idea of 'purity' or 'superiority' is fatal to proper analysis of each medium's specific uses (not strengths and weaknesses: uses) and creates stupid 'wars' among people who can, and should, be allies. We're all writers, we're all storytellers, we're all creators. The novelist is neither better nor worse than a screenwriter: one is not a failed or less talented version of another. These are two different disciplines that require different skills and tell their stories differently. It's not about being 'easier': it's about appreciating what each medium can offer your particular story.

Some can even straddle both worlds: Roald Dahl, William Goldman, Gillian Flynn, Raymond Chandler and George R.R. Martin spring to mind. These people have varied bodies of work and by exmaining, and appreciating what's shared and what's different between their prose and screen work, can we develop a richer understanding of both crafts, and that, really, is what matters the most. Writing, no matter the field, is hard. Novels and scripts present unique challenges, while also having the same core component: tell a great story. What that story is and what it will convey is up to the writer and what the medium he or she works in can provide.

Hubris and arrogance can kill any writer. Be smarter than that. Be better than that.
Posted by ADiaz at 00:57