I was fortunate enough to be able to go to the launch for the second series of Pablo (now broadcasting on CBeebies and RTEjr). Our wonderful producer and brains behind Pablo, Grainne McGuiness, flew over the writing team for the launch of Series 2 on Oct 1. What follows is an account of that experience and, possibly, one of the most humbling days of my life. 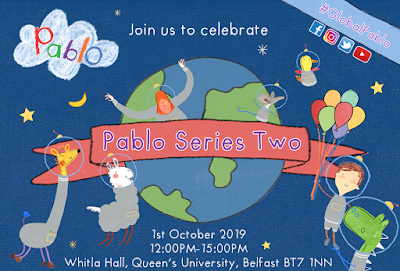 I flew out on Sunday from Heathrow Terminal 2: long story short, it became complicated and the flight was delayed from around eleven to nearly nine at night. Officially it was due to bad weather, though a different source claims it was kamikaze birds. Still,  I met up with two other members of the amazing team, Paul Isaacs and Sumita Majumdar and chatted over Pepsi and peppermint tea, so not all bad.

Monday is where things really got started: we conveyed for a day-long writer's room to talk shop about the future of the franchise in multiple areas. Sat in a fancy conference room up at the Clayton Hotel, we did a dry-run for Tuesday's panel, before jumping in on pitching stories for the (potential) third series. Pablo was aging, so we had to take that into consideration. Following a sandwich-based lunch, we then brainstormed plot for a stage musical based on the series, doing it in partnership with Selladoor Worldwide/Productions, debuting hopefully next Christmas for a nationwide tour. 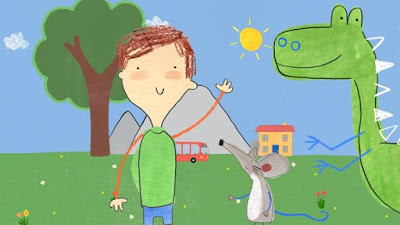 The atmosphere was electric, and everyone was on top form. We joked, spitballed and pondered a number of topics - school, sports, the myriad manifestations of autism, Dead Ringers sketches, old Gerry Anderson shows. Alas, I cannot discuss more details of either project at the moment, but sufficed to say, I was really proud of what we came up with.

Then, we had a few hours free in the evening, I pottered around Belfast City centre, did a bit of sightseeing in the rain and bought Kraven's Last Hunt, an iconic Spider-Man story from the 80s, for a cheaper price then I'd find online or here in London. Not that this is a vital part of the trip, but when else am I going to bring that up in conversation?

Onto Tuesday, the day of the panel and premiere. Dressed up and checked out from the Clayton, we were all taxied down to Queen's University Belfast for the event. The room was set up with a number of tables: the event was organized as a lunch, with a buffet stand nearby. Many of the invited were child actors on the show and their families, in addition to press and television people. Just seeing these kids there, how their lives had been changed by both watching the show and then acting in it... it was one of the most amazing moments of my life. There and then, I felt like, in my own small way, I had helped give these children something that they'd never access otherwise. 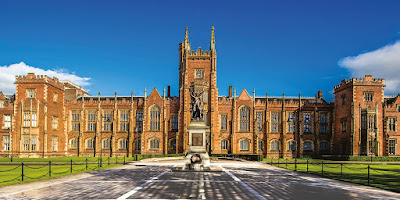 As for the panel, the writers would get on stage, have clips from their episodes play, and then discuss the genesis of said episodes. Being me, I opened with some quick jokes before diving into mine: seeing a clip of Oink Cluck Neigh getting a big laugh was just delightfully reaffirming. Afterwards, we adjourned for steak pie and then watched the first episode of Series 2, The New Sofa by Michael White. A funny and sweet romp, it could not have closed the event off better.

What a time. Sure, it was bookended by delayed flights (thankfully shorter on the return), but being in that room with all those families.... what an honour. Here's hoping Series 2 is everything fans love, want and more. Hopefully, it won't be long before I return...
Posted by ADiaz at 00:51