Almost a year on from delivering my last draft of my second episode, and I still can't believe I got to work on this amazing and progressive little show. Pablo has helped open up a conversation and humanity previously not common in mainstream representation of autism, especially with an audience this young.

Having just had such a wonderfully humbling experience, attending the launch for Series 2 (starts today, Oct 7), I figured I'd go back and talk about what I learnt, as a screenwriter, from working on the show with PaperOwlFilms and Andrew Brenner. 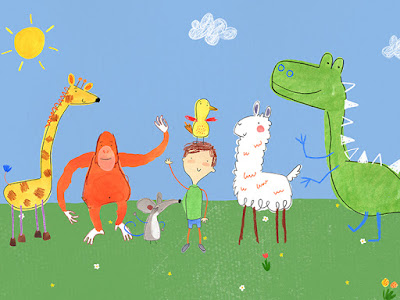 1. Tailor your ideas to the show; don't be generic.
Kids shows, especially pre-school, can often seem like they recycle a lot of plots and concepts: birthdays, making friends, sharing, family troubles, playing games, learning about rules and manners etc. However, the nature and cast of the show will often provide a framework that dictates what will and will not work, so going broad doesn't work.

In the case of Pablo, it was important to tailor the stories to be about autism and how it can affect one's perception and interaction with the world. Generic stories of mischief and messing about were not going to cut it (I foolishly tried early on), and through that, I came up with Headache Volcano and then, through a lot of trial and error, Oink Cluck Neigh.

2. Be concious of other languages and cultures.
Every language is different: not simply in the obvious, but also in terms of colloquialisms, sayings and maxims. Not every phrase or word can be translated, and this becomes even more tricky when dealing in metaphor. The saying 'peachy' may have a clear meaning in English, but does it make sense in Italian or Greek or Swahili or Japanese? And that's just one example.

It's also a matter of practicality: the animation's audio can be dubbed easily, but the live-action requires lip-sync and, of course, animation cannot always be redone for visual symbols anchored to a specific saying and culture. When you are selling to countries whose languages don't have equivalents can create problems for whoever's doing ADR and even the editing (alternate cuts of episodes are hardly uncommon). In an increasingly globalized marketplace, accessibility is key.

3. Even when you get commissioned, you get rejections.
Many newer screenwriters believe that just being commissioned is the end of the struggle: you've been hired, so you're good enough. You just pitch and write, cash and cheque and that's that.

Aside from just coming up with appropriate ideas, as discussed above, there's also the process of redrafting and rewriting.

One pagers, treatments and even scripts can get shot down or scrapped at any time, for any reason. Even if an aspect or the core is good, it may simply not be doable on the budget; the time; be too similar to something they're making concurrently or evolves into something that doesn't fit. It happened with Oink Cluck Neigh: that went through several versions and alternative plots that were just unworkable with what we had

4. Don't underestimate kids.
An enduring stereotype about kids TV is that it's made by cynical hacks who believe kids are stupid and need something bositerous and loud to keep them amused while their parents do something they're actually interested in.

While bad media does exist, it's important not to assume that as the default and come into work with a negative attitude. Children are the most honest audience: if you're boring, they will let you know. However, they can quickly pick up symbols and meaning, and get deeper implications of relatively simple stories (think of say, Aesop's Fables or various fairy tales)

5. 'Being gentle' is not the same as 'dumbing down'.
Pablo is a gentle, delicate show: it's light and fun and colourful, perfect for the intended young audience. However, as anyone's who's watched it can attest, it is not twee or slight in the least: we've used the show to talk about everything from communication difficulties, social anxieties and illnesses to science, maths and art.

The key is being mindful: we don't go too hard or be really obvious when discussing something potentially distressing like social events or life changes. Using metaphor and proxies, creating universally-comprehensible subtext, enabled us to tackle an impressive amount of topics that children with autism face on a daily basis. This, paired with the above-conciousness for the wider market, challenged me and others to create something anyoen and everyone could get.
Posted by ADiaz at 14:54