As part of the 2019 ITV Original Voices scheme, I was invited up with other BAME and disabled writers to attend a day-long masterclass/simulation of working on the storylines for the long-running and much loved drama Coronation Street. Departing London while still dark, finally diving into a three-year-waiting copy of Anno Dracula for entertainment, I found myself up in chilly Salford's MediaCity, where ITV and BBC stand side-by-side across the water. 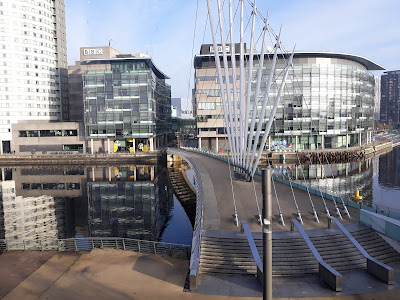 Along with about 19 other writers, we were guided up into the cosy Corrie offices in ITV Studios and met the story team, like the wonderful Lindsay Williams. They talked us through the day's itinerary, got everyone introduced through an ice breaker over croissants and coffee, and then walked us through the process of making Corrie:

It starts with the story team: they meet, generate ideas, map them out ala a writers' room board and then go off and break those down into indivudal storylines. Following revisions and more meetings, these are then handed off the writers.

Actually, let me present this easy list to detail the process:
Armed with that knowledge, we were broken off into groups and set a task: brainstorm our own storyline for the next two eps (Monday 2, 7:30 and 8:30), following on from Friday's episodes. We had a choice of Jade and Hope (the obssession storyline), Roy and Nina (the more grounded care storyline), and Michelle and Robert (the big revenge storyline). I was in the Roy team and, with laptop and notepad, got to work with my team, conjuring up where the rocky relationship could go next.

There was a definite energy and kinesia there - it was so much fun just brainstorming and throwing ideas around. I found I rather missed this since the Belfast room I did for Pablo.

Oh, and part way, we were given a tour of the Corrie set, so huzzah! 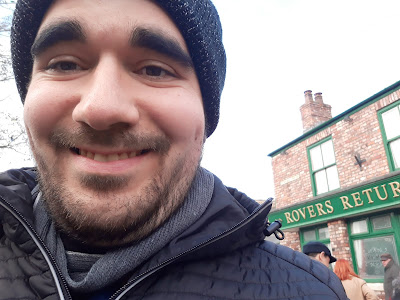 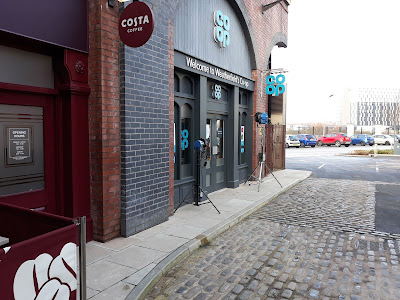 Later, we presented our storyline to the groups and story team. We were met with strong approval and felt quite chuffed about that. So, we were sent off home with our assignment - write two episodes (one night's) worth of storylines, from our group's work, and send them in Sunday to be judged. From there, well, some may get asked for revisions (like me), and then after, a lucky four will be selected to work on the series.

This was a very rewarding and valuable experience. A stereotype does exist of soaps/continuing drama as this lazy, silly, harrowed type of project, but it's actually a well-oiled machine and one that does genuinely care about story. If you've been running as long as Corrie has, well, something must be working. Indeed, the system they use is fairly close to other shows, such as Eastenders (though some, like Doctors, can be looser with writers pitching their own stories).

I also felt my ability to outline/write treatments did get stronger from the exercise, since every paragraph counted and we had only 8 to play with for a whole episode. Over the last year I've definitely put more into planning my scripts in detail, so this was a welcome booster.
Posted by ADiaz at 10:22