After taking a slight hiatus due to external circumstances, I returned to pound out outline revisions and then dive into the first draft (or second, if you think of this as one overall project). I think now is as good a time as any to restate that first drafts will never be perfect. As a work develops and evolves, you will change things. Depending on if it's purely a spec or a paid assignment, the level of detail will vary a lot. Of course, on paid work you will also have a regular collaborator, there to help and guide you through treatments and outlines.

When it comes purely to specs, I try to fix the most glaring stuff but the key, for me, is to have the shape of the story right. Even if characters may not be fully well-rounded, or every scene vital (because again, evolution), it should hit the key beats and have enough scenes that do excite me. For example, as I was working through this outline, I changed up the three main setpieces. In a treasure hunt story, these are your highlights: the boulder in Raiders, the mine carts in Temple, the plane chase in Mummy. Before, they were all underground crypts with traps. That's fine, but I wanted to toy with that a little bit - how could I play around with traps? Where would the crypts be? Did they all need to be crypts? 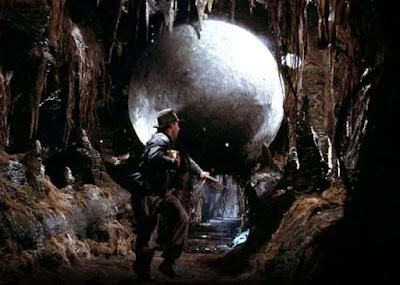 Another change came in integrating the families of the main cats more - it not only added more texture and dimension to the world, but it also gives you additional ways to explore the main three when they are not 'on the job'. How do people behave to the world versus in their own world i.e. the home? What does where they live, and who with, say about them? Their successes, their failures, their aspirations etc.

Just like last time, I aimed to get the script draft written within a week. Like before, it was a tight squeeze, but I found it rather exhilarating, pushing myself to move as quick as possibly while still producing something with detail and humour. Four acts plus a teaser, and clocking at at nearly 60. I'd say that hit the spots. In first drafts, to also restate a past point, getting the thing done is what counts - you don't need to worry a whole lot about spelling or tweaking and rejigging scenes at this stage. That comes later - just get it down. What actually exists can be edited and fixed.

In the end, I came out of this much happier than the previous version - I think the characters have real room to grow and actually want something, rather than the kind of homogeneous mass of before. It was less aggravating than before and I just let myself have more fun this time. The mistake, before, was in thinking too much of the lore and setup, rather than on actually crafting a story. World building is a wonderful thing, but without character or stakes, it's all just text.