Now, where were we?

Something to note: beware of 'script sites' that are just transcripts of TV episodes and movies, like SpringfieldSpringfield. They are not accurate in formatting by a long shot, and don't even serve to help analyze a given story all that well as they're usually poorly written and hard to read. Basically, if it doesn't look like this, don't bother: 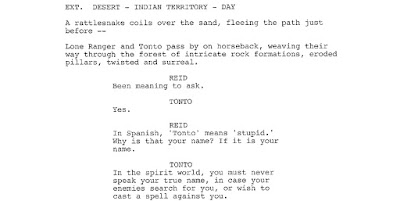 Instead, here's where you can get actual screenplays for film and TV from:
But it's not only free scripts you can score over the interwebs: how about advice and tutorials? An immediate reccommend is Bang2Write, run by veteran consultant Lucy V. Hay. It's a one-stop shop, filled with great articles and lists on just about every facet of screenwriting you could want to know, told in a humourous and snappy style. Another good resource is BAFTA: they have an acclaimed series of lengthy and informative lectures by major screenwriters, including Emma Thompson, Hossein Amini, Charlie Kaufmann and David S. Goyer.

Furthermore, many of the gurus have websites full of resources, related to their paradigm (like Save The Cat), as well as The Writer's Store and Scriptmag.com. There also exist a number of smaller sites such as the newer but pretty decent Word Dancer (it even has a complimentary Youtube channel) and TheBitterScriptReader (more geared towards the US, but worth a gander).

What about writers' blogs, as in, blogs run by actual, working writers? Danny Stack's site, Scriptwriting in the UK, is a great one: just like his book, Stack talks about everything and anything related to the business and craft. Another favourite of mine is Wolfblood creator Debbie Moon's blog, loaded with war stories, as well as some very helpful tips and tricks on what to do and where to look.

There's also  some podcasts you can listen too: Stack and Tim Clague strike again with their popular UK Scriptwriters Podcast, while over in the US, John August (Big Fish) and Craig Mazin (The Huntsman: Winter's War) have ScriptNotes: both discuss the industry climate, interview guests and offers all sorts of advice and weird stories.

So, you know have your books and scripts. Read as often as you can: in bed, on the bus/tube/train, during break and lunch, even on the tried and tested loo. It may seem obivous, but I want to smash my head against the wall with how many writers DON'T READ scripts and can't name screenwriters (Seen it with my own eyes too). Quick question: how on earth do you expect to get work if you don't know who's done what?

But surely, this isn't enough: you also need to do a Masters degree next, in order to really seal the deal. Or, maybe, you abhor academia completely and just want to go it alone. After all, Tarantino and Paul Thomas Anderson did, so so can you! It's just that black and white of a choice, right? Right?

Join me in Part Three when I talk about courses and the value of your education.
Posted by ADiaz at 01:01