Review: Screenwriting is Rewriting: The Art and Craft of Professional Revision

Given I've made my feelings know about screenwriting gurus and the whole field of writing teaching before, I decided why not jump on the bandwagon's bandwagon and review some books on the subject in a new, ongoing segment? And what better one to start with then one of my personal favourites: Screenwriting is Rewriting: The Art and Craft of Professional Revision by Jack Epps Jr. 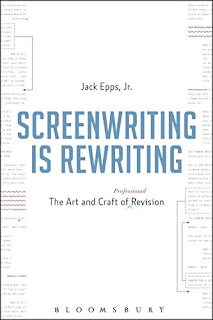 The man behind Top Gun, Dick Tracy and Turner & Hooch attacks the rather volumunous world of screenwriting theory with a different perspective and emphasis: instead of long sermons about Aristotle, three act structure and 'negation of negations', Epps focuses more on the actual process of rewriting your screenplay and getting it into the best shape possible. Across linked chapters, he breaks down and discusses ways to identify problems, create game plans and give oneself targets during rewrites to strengthen your craft and content.

Epps' methods may appear, on the surface, to be slower and more lethargic than what we normally associate with rewrites (recommending individual passes over one big attack, as well as lots of planning and detailing), but there is a clear process at work. In each chapter, Epps very plainly breaks down the how, why and what (going through topics like dialogue, characterisation, pacing, scenes) in a manner not disimilar to a good teacher (he is the chair of the School of Cinematic Arts at USC). He even readdresses and recontextualises concepts and processes throughout the book, showing how every piece of a screenplay must be carefully considered and nothing left to luck or chance as they have a knock-on effect on one another.

One of my favourite parts of the whole book is his suggestion of compiling all your notes on a script, and breaking them down by categories (again, character, pace, dialogue and many more subcategories, depending on what detail you like going in) in a type of plan. From there, depending on the project, you can prioritize what the biggest problems are and leave minor stuff till later, drafts or passes. I have found this incredibly useful for my own rewrites on projects and it helped clear so much of the clutter I had had trouble with before. Even his stressing of handwritten notes and twice reading your script, while it may seem a no-duh, only hit home once you try them and realize how much more liberating and clarifying they are. 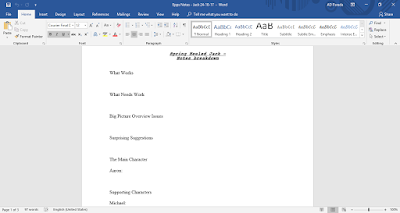 This more matter of fact approach is the book's greatest strength, feeling completely unpretentious and just focused on giving the writer clear tools on how to make a script better. As a bonus, he even provides examples of his techniques in action, both on his own projects as well as from some of his former students, just to hit home that this is not snake oil. Those with more of a taste for drama/literary theory, however, will not get much from the book's bluntness and mind on application rather than analysis or philosophy. This is a work tome, not a quick or casual read.

However, there are already plenty of titles that fill that cavity in, and it's good to have something more immediately useful to a practising screenwriter in a market often criticised for not providing such tools. Easily one of the more refreshing titles to have hit the market in some time, Epps provides a book less interested in esoterics and more in practical use to the writer. Highly recommended.
Posted by ADiaz at 11:37