Well well, been a while since I gave an update on my actual projects. Well, I've got some fun goodies for you!

First up, Peter Grey threw up an online call for a book writer for his new comedy musical production, based on a yet undisclosed novel. To apply, one has to send a short bio along with a sketch they written. My sketch is oh so uniquely and creatively titled The Butcher's Sketch and well, plays out that seemingly mundane scenario with a few fun little twists.

Now, following on from The Cannibal's Culinary Guidebook, I've decided to throw out another outline, one for a Holmes novel no less, to Thebes Publishing. It's called The Atlantean Conundrum, and this is the basic jist:

Spring, 1890: An incredible archaeological find is exhibited at the British Museum: a mysterious tome with unknown writing, found in what some speculate is Plato’s tomb near Athens. At the same time, a young woman is found murdered near the Thames, strange markings riddling her arms and no means of identification. Indeed, according to Holmes, she doesn’t even appear to be familiar with most modern norms of dress or behaviour. What seems like random crimes turn into a race for that most famous of lost cities, as Holmes battles those who'd kill to find it, and those who'd kill to keep it secret.

Third, I've written a new short film script, for submission, The ArtsEd Drama School in London,  based on the legend of Faustus. The piece is called Sign Here. I managed to get in on time before the deadline of April 30th, although now that's moot as they extended the deadline into May. The upside is that it gives me more more time to work on the second short that would've been submitted alongside Sign Here, called Been There, about a young man who invents time travel to correct something that haunts him.

And well, there you have it. As always, many thanks for your continued support on my different platforms. Also, be sure to check out the ongoing journey of my own animated series, Very Strange Things, here (fun ahead!): http://verystrangethingsanimated.blogspot.co.uk/ 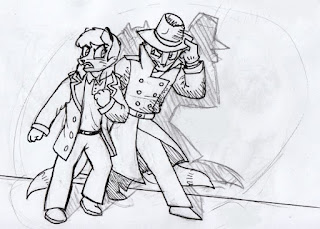