Right, time to get started. Figured I'd collate these, since the individual days don't offer enough alone at the moment. At this stage, I'm strictly in research and making rough notes - meatier writing comes a little later. However, I think recounting this is useful in examining process and seeing where choices can lead. Plus, you get to hear me waffle about various topics. Hooray!

So here's the deal: I want to do something adventure-related, something closer to my own tastes in fiction, compared to 2019's specs. Got a few very, very broad concepts of what exactly: Possibly family friendly; Maybe do one that's more thriller/mystery; Maybe something retro, like a pulp adventure-serial. This is the stuff that made me not just want to write, but to create at all. I've loved adventure stories since I was a kid: lost cities, buried treasure, ancient mysteries, derring-do on plane, train and automobile. Tintin, Zorro, The Shadow, Doc Savage, the Sommers Mummy films, Disney's Atlantis, Treasure Planet, Pirates of the Caribbean, Three Musketeers, Sandokan - Love it, love it, love it. 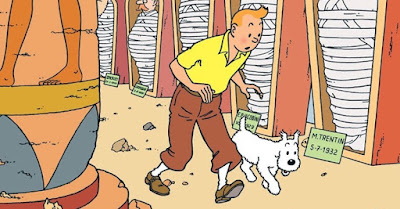 So, where's a good spot to start: research the genre and revisit your influences. Learn what works and what doesn't. In no particular order, because it doesn't matter right now, here's what I've been watching and reading to get me in the adventuring mood, over the last few days:

The Adventures of Tintin

Man, it's been years since I actually read these. As a kid I could barely get enough of these, or the 90s TV series Nelvana made. Probably had more VHS tapes than comics, even - it was like a drug. Went back thorugh The Seven Crystal Balls (probably my favourite of the series), Prisoners of the Sun, Secret of the Unicorn, Red Rackham's Treasure and now, Cigars of the Pharoah.

They're no Watchmen or Sin City, but wow they actually hold up well -  Herge's kind of underrated as far as being a master of pacing goes, as well as his gift for perfect comic timing and slapstick. The books are uproarisously funny, in addition to quick moving at only 62 pages. The plots are not terribly complex, but they have strong hooks that get you into the swing of things quickly and never let go. The perfect alternation between exciting chases, fistfights and pratfalls gives the books a dynamism that even full-blooded action comics don't always have.

In addition, Herge's not afraid to give you a big and wacky cast - Captain Haddock, Professor Calculus, Thompson and Thomson, Nestor. All distinct, all with defined personalities, quirks and flaws that Herge mines for gags. All 100% memorable. While Tintin is, in some ways, the weakest character, he isn't flat or boring, by any means. Indeed, his simple, earnest desire to do good and solve mysteries acts as a balance,a  srobet to the craziness of everyone and everything else. He gives the stories a center of narrative gravity. Plus, his job as a reporter gives an easy excuse to squeeze in explanations and expositons without feeling as obligatory or tedious as it might.

Hooten and the Lady

Decided to check in on one of the more recent, as well as bigger, TV productions in the genre, courtesy of Death In Paradise's Red Planet Pictures, and created by legends like Tony Jordan, Jeff Povey and Sarah Phelps. Basic jist: a slovenly American treasure hunter and prim British curator team up to find treasure, Odd Couple by way of The Road To style. 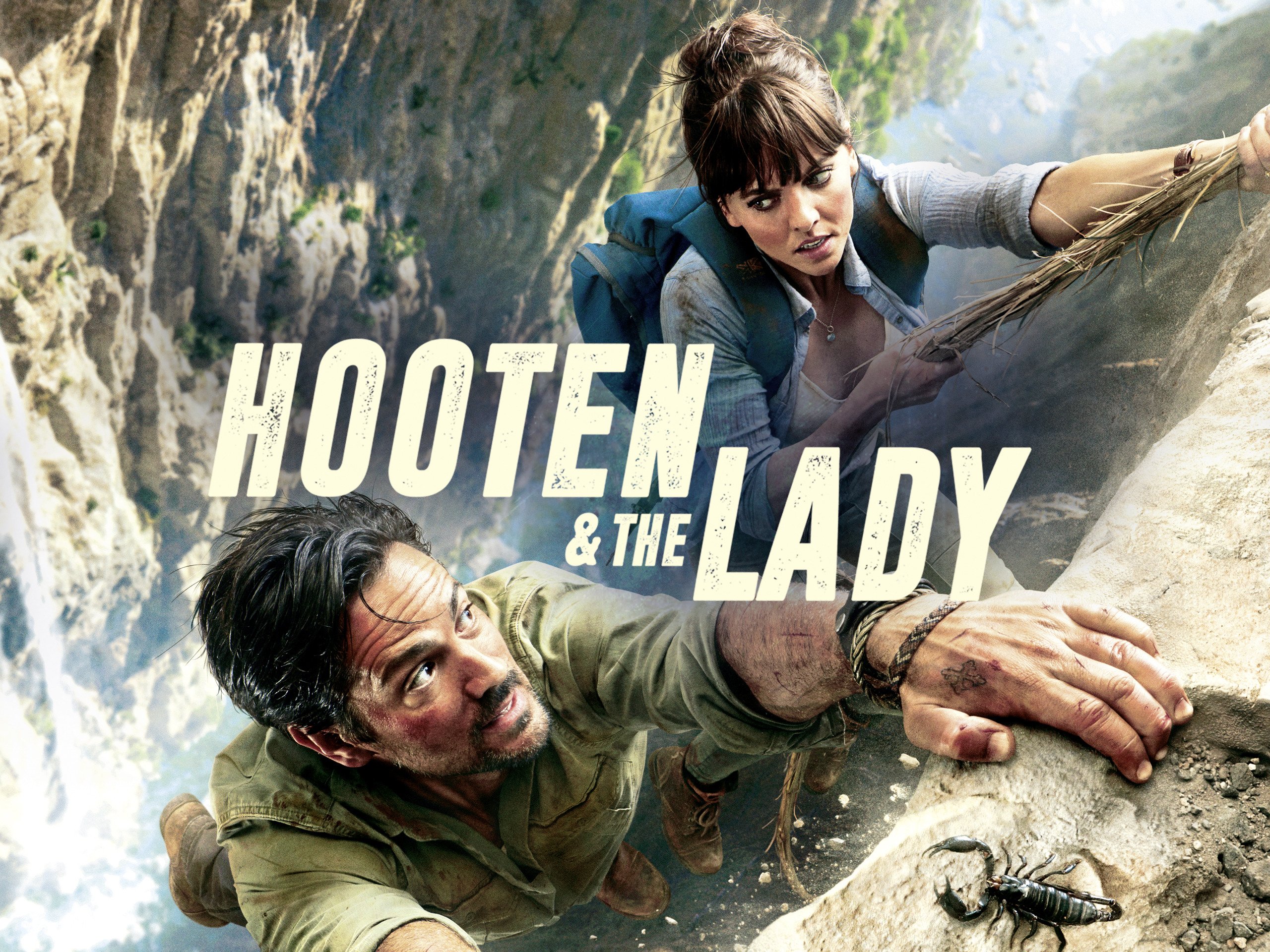 It's quite fun - the stories move well enough and the leads have likeable personas and chemistry. However, some choices seem counterintuitive and frankly, I can see why it lasted only one series. Now, I'm not arrogant enough to think I can write better than Tony Jordan, but some of the choices made me wonder. For one, the show's engine isn't very well defined - in fact, it takes three episodes for it to become set down how all the character dynamics work. Without that, at the end of episode 1, I just felt like, 'How can this come back, week after week? I don't know how these people tick or how you can get them into new adventures without it feeling contrived.'

The villains too - in contrast to Tintin and some of the other stuff I'll discuss, they're all forgettable gangsters, thieves and rich guys. No cool gimmicks or names or personalities - no Bellocq or Mola Ram or Imhotep or Barbossa or Rastapopolus. Parts like these scream for great character actors to play them - they often get the best lines and toys in the movie/show. Real boo-hiss just utterly vile but loveably so types. Make the heroes seem to be in real jeopardy.

Plus, it seems like the show can't split the difference between serialized and episodic - the running arc of Lady Alex's wedding is lightweight to a fault. I get what theyre going for, contrasting mundane domestic life with adventure, plus it lets Alex have a nice guy boyfriend to contrast with the rough and tumble Hooten. However, maybe he and it are too nice - it doesn't feel like there's much at stake if she gets married or not. Plus, there's some stuff with Hooten's past, but it gets closed off in the penultimate epsiode, meaning Episode 8 is left with an amusing reversal but not a substantial threat, leaving the finale as kind of flat. Still funny, but dramatically light.

Doc Savage: The Man of Bronze

Read some more of the pulps last year, so instead decided to revisit the 70s film adaptation, starring Ron Ely as the super scientist who uses his genius and wealth to fight evil in the 30s with the Fabulous Five, WW1 vets-geniuses in various fields. This one was overseen by legendary sci-fi producer George Pal, and directed by Englishman Michael Anderson. 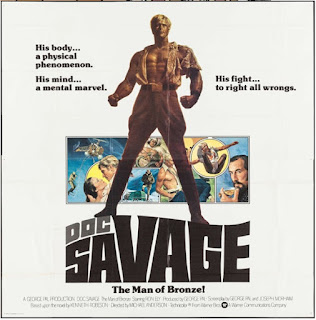 The books are better, for sure, but I kind of dig this: it's goofy and campy and lulls in the middle in ways which sound loud and clear budget problems, but I like it. The opening in New York with the Mayan assassin - near-perfect translaton of the stories to screen. Ely acquits himself well as a classic screen hero - square-jawed, gentle smile, ripped and gosh-shucks-earnest about everything. The villains aren't exactly great, but they're memorable - the pompous Captain Seas who gets a pre-Ausitn Powers evil laugh scene, or the weasley Don Rubio who sleeps in, I kid you not, a giant cradle. It is hilarious and bizarre in the best ways.

Shame the climax is a bit of a damp squib - just punch-ups near a pool of bubbling yellow-err, I mean gold in a jungle set. Plus, though it is often chuclesome, the comedy balance isn't as good as Herge's - it can go too far into goofy, which hurts the dramatic tension and stakes sometimes. Examples include the tacky theme song, a literal hatchet job of John Philip Sousa music; Doc having a pointless animated twinkle in his eye, or a drawn out fight between him and Doc that plays like one part Austin, one part Kung Pow: Enter the Fist.

This was an overdue revisit - the Avenger was created by Street & Smith to replicate the success of their The Shadow and Doc Savage pulp magazines. In essence, he's a fusion of the two - a super-smart adventurer-vigilante with a loyal crew. When I read the Nostalgia Ventures reprint of his first two adventures, Justice, Inc. and The Yellow Hoard several years back, I wasn't impressed - found them too derivative of the other characters.

Now, revisiting them, I think I was too harsh at the time. It's actually very slick and tightly written - I get the Avenger's motives in Justice, Inc., the stakes and want to him see him take down the buggers who killed his family. It moves at a great speed, throws plenty of sudden twists and turns and doesn't want for the sort of melodrama to thrill the 13 yr-old and 13 yr-old at heart. Admittedly, it can be a  little cheesy, as befits the sensationalist style of pulp magazine writing, but it's so well put together it doesn't really matter.

There's just loads of little cool details writer Paul Ernst (writing as Kenneth Robseon, the house pseudonym) squeezes in - the Avenger's knife and gun are called Mike and Ike; we get little snippets of his youth to explain various survival tricks he can pull off; the Avenger's face can be manipulated like putty, allowing him perfect disguises. It's heightened, but it adds a lot with these bits of worldbuilding and even character detail.

Doing this has been fun, and I've made some small notes along the way - mainly random thoughts about situations or sequences. Nothing much in the way of character or plot yet, but definitely thinking about the worlds. Sometimes I just scenes or little moments before I find the connective tissue. Some of it includes: