Jed Mercurio and the Importance of Screenwriter's Etiquette (Part Two)

Don't think I need to explain who Jed Mercurio is if you're reading this blog: probably the most successful British screenwriter of the moment not named Nolan. Line of Duty returns for another series and so, press gets generating. One such was GQ Magazine interviewing Mercurio and talking about working amidst the pandemic, as well as some asides to his political and social views. 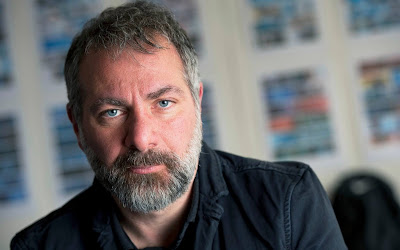 On its own, just a simple piece, save for one topic: amidst talking about issues with modern journalism (a topic, to be clear, worthy of examination), Mercurio uses this as a segway to touch on his noted animosity with television critics, and in particular, highlighting an incident in 2019 where, well, I'll let the article explain:

That became particularly evident when, in December 2019, a storm erupted on Twitter after he called out the Guardian for including Line Of Duty in an article titled “The Biggest TV Disappointments Of 2019”, which also included Game Of Thrones and Killing Eve. In a now-deleted tweet, he directly addressed a young critic for her involvement in the article. In it, she suggested that the show had gone “catastrophically off-piste” by revealing that the mysterious “H”, supposedly the inside man at a high level in the police with links to organised crime, was not one, but four people. “The biggest disappointment these jokers really experienced in 2019 was when they realised what they do for a living,” he wrote, followed by another message directed at her that lead to several fellow journalists tweeting back angrily on her behalf, defending her right to criticise the show.

And then he capped off with this:

I don’t see why it’s OK for a journalist to participate in an article which is fundamentally sneering and not at least have some insight into what a c*** she’s being. If you go into the public domain having a pop at people then expect some comeback. There was actually an enormous pile-on from journalists saying, ‘She’s just doing her job. She’s a talented writer.’ She’s a piece of shit. Fuck her.”

Well... that went from one to fifty fast, huh?

Indeed, why is this eerily similar... (he said, plugging his article about Joe Carnahan and El Chicano that this one is a sequel to.)

DISCLAIMER: I do not know either of the two main individuals. Nor am I here to demonize Mercurio or denounce his work or collaborators. Like with Twitter's 'Line of Duty was never good' takes, this misses the point and trivializes the real issue here.
Seeing someone of Mercurio's stature behave like this about one critic's review of Line of Duty is troubling. Just like with Carnahan's infamous blunder, it is another example of people at the top not setting the example to newcomers: yes, art is passionate and we get very invested in it. Yes, being upset at a bad review is understandable, but to engage in public shaming like this, and then hounding said critic off of Twitter, for the crime of being, what, the one person who wasn't raving about monster-hit and critical darling Line of Duty?
Mercurio should know better, rather than perpetuating this 'war' between media critics and creators that achieves nothing nor improves either discipline. In the same way it's not our job as writers to please critics, it's not their job to pat us on the head and give us cookies. Does that mean you agree with everything someone writes about your work and have no right to defend yourself? Of course not, but Mercurio's reaction reads as completely disproportionate to the situation.
(As an aside, can we also can it with the 'critics are failed artists' schtick? Besides being the weakest scene in Birdman, it's so hilariously untrue and, furthermore, ignores the ones who do both successfully. See Rod Lurie, C. Robert Cargill (back to him in a bit...) and the entire French New Wave that changed cinema in the 50s.)
What's worse, and especially bad for newer writers to be seeing and taking after, is that Mercurio claims in doing all this, he was giving the critic a chance to respond to him. Okay, but why then front load with ad hominems if what you want is a dialogue? Why not create an actual constructive dialogue with this critic so that both you and they learn from it, instead of shouting and calling them this-that-and-the-other? Sorry, but this isn't actually engaging with your critics: she was going to lose, no matter what she actually said or did.
Like I wrote in the Carnahan article, the truth of internet fire-fights is no one, regardless of position, comes out looking good. If you misconstrue critique of the work as personal attacks, proceeding to broadcast that ire everywhere, how can you expect to work with other people and improve both yours and their work? What are you telling peers about yourself when you do this? What does this say about your values? Conduct and etiquette matter; doubly so when you don't have the stature of a Mercurio to act as some kind of (albeit poor and in no way actually valid) excuse.
Indeed, I think newer writers very much need to bear this mind: perhaps not from your work getting reviewed by published critics, but any time you get feedback/criticism on a project. Script reading services, script editors, even just getting feedback in a writing group. The core principle is the same: You have to be able to listen and not freak out when someone doesn't like what you write. A great saying that stuck with me is, 'look for the note behind the note'. If you feel like a criticism of something you made doesn't make sense, rather than start attacking, like Mercurio did, put some distance between you and the critique and think: why would they say this? Is there a choice I made that made them take away that impression instead of the one I wanted?
But hey, if I can't convince you, because my work isn't on the same plateau as Mercurio, let's hear from a writer who is: here's what novelist and 'Doctor Strange' (An MCU film is, I'm sure, more than a match for LoD in notability terms) screenwriter  Cargill, has to say about taking criticism: 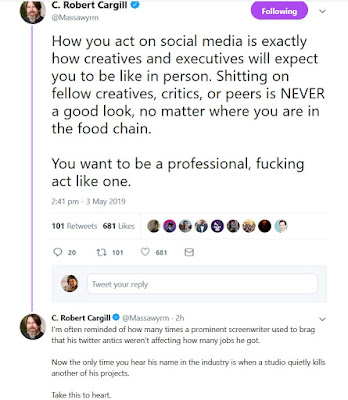 As a capper, I think it's worth considering the personal effect here: being able to handle critique is not just important for having a career, a good image and navigating the industry - it's necessary for your own mental wellbeing. Using others for validation, especially when it involves critique, is a fickle thing and is more like a coin toss. When you land the tails of negative feedback, being snippy and hyper-defensive is going to do your own confidence no favours, and shows you lack perspective on your work and yourself. Writers can often get stuck in negative mires, worrying about our ability or worth, and anger, while understandable, is not the answer to these insecurities.
Have faith in your ability, be confident, but don't get into the mindset of you are always right. Writing, like so much in life, is a learning process, and art is really subjective. Understanding this will take so much of the anxiety off your shoulders when you're making stuff: not everyone will 'get' you, and that's fine. You don't need everyone to love your work and praise you. Instead, take pride in the little victories - finishing a page, or three, or ten a day. Writing a gag that makes a friend or collaborator laugh. A tight action scene. Do the work, listen and keep on writing - if you're not enjoying it, why bother?
Posted by ADiaz at 14:50