Right, so  went and did some more jotting and mulling, before returning to do revisions on my treatment. Here, the main objective was expansion and refinement - I needed meat on my skeleton.The easiest parts to write, I found, were the teaser (which sets up the world and was the most throwback-y of the story, so I got to indulge in my Herge-impersonation here), as well as the first act (as here is where I had the most clear picture of my pilot's narrative, and what my cast would be doing). The trickiest was the climax and ending - I knew what they were, but writing them down into something visible, as well as sensical, proved to be a lot harder. By my own admission, endings are something I struggle with, whether I know my story's outcome or not (and I almost always do) -  I enjoy the journey that the destination comes off as an afterthought, and can be a headache to tie in.

Thankfully, the treasure hunt aspect of the plot gave me something to anchor myself with, so it proved less of a nuisance than usual. I was feeling more confident, and even snuck in some more details about the world and the characters lives into the treatment, because I could (such as the contents of the children's lunches during a morning school run scene that set everyone up). Was it dramatic? No, but it just gave me another few more spots to paint in as, slowly, the world of my pilot started to glow in my mind and reach out to me.

Speaking of glows, I also colour-code all my acts, which gives me a quick visual means to gauge what parts of the pilot need lengthening or shrinking, as well as just make it easier to digest my work in review and be able to point right away and say 'okay, that's there, and there and there.' 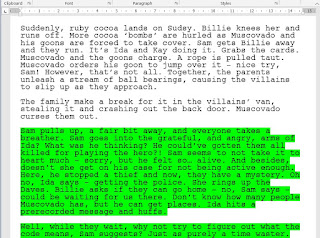 After that was done, I did a readthrough, to see how it played (IN SHORT, PROMISE BUT QUITE WONKY), and then I did a scene breakdown to help marshal my points and criticisms into a gameplan. I should clarify I don't mean a step outline (though that will come soon), though these terms are used interchangeably. Here, the difference is my outline is, essentially, the script without the dialogue - it's all the action. A scene breakdown, on the other hand, is the cliffnotes, the broadest possible version of what every scene does, so I can tell what can and can't stay and pulls its weight.

The breakdown revealed that my second act was too long, with two setpieces sandwiched back-to-back, and my third act woefully short with basically one revesal and a whole lot of chatter. Character development and choices weren't there - it was reading much flatter than I had initially thought - doubly problematic, as the family story is the heart of the piece, the glue that holds the adventure hijinks together and makes it live.

Once again, turned to my notes and began to scribble and pound out little ideas or twists on scenes, as well as what needed expansion in the next go at the treatment.

Email ThisBlogThis!Share to TwitterShare to FacebookShare to Pinterest
Labels: Diary of a Spec Script, Screenwriting, treatment